The week starts with the good news that all the five EPL teams have advanced to the next round of the UEFA Champions League. But the mid-week continental fixtures will surely take a toll on this weekend’s fixtures. This is a weekend of derbies. We have the Manchester derby and the Merseyside derby to focus our online betting energy into – plus there are some other exciting fixtures as well, such as Burnley vs Watford. Let’s move on to the previews. 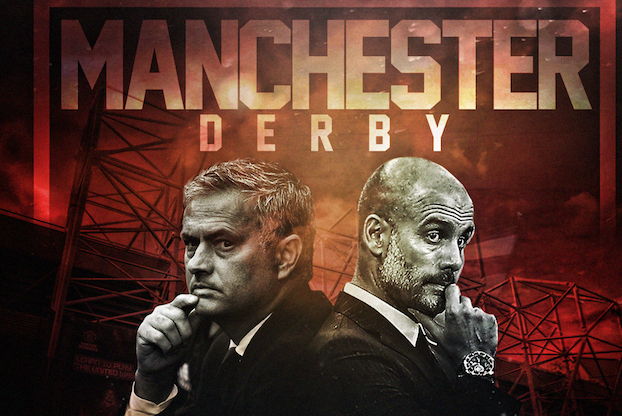 It has to be the Manchester Derby between Manchester United and Manchester City. This time, the match will have a bearing on the title race as well. City are leading, with 43 points from 15 matches, which means they have lost just two points. In other words, they are galloping majestically with 14 wins in their 15 games. Awesome, isn’t it? That is the only thing that dwarfs Manchester United’s otherwise impressive record: 11 wins and 2 draws from their 15 outings. Despite the impressive performance, they still find themselves eight points short from their recently wealthy neighbor.

This is United’s best chance to puncture City’s dream run. But they will be without their main midfielders. Paul Pogba will miss out after his red card in the previous game. Nemanja Matic and Marouane Fellaini too are nursing injuries. The good thing is that that will give Ander Herrera yet another chance to show his worth in the midfield. City have no injury worries.

United lead the H2H stats in recent times: three wins and two draws in the last six matches. But City have been in imperious form this season. It would be tough for the red devils.

Liverpool are all set to unleash their fearsome attacking force on their neighbors on this Sunday at Anfield. Everton in all probability will park the bus in their half. It will be tough for Everton, even though they are in good recent form, having won their last two EPL matches. The last time Everton won the Merseyside derby was in 2010. The last time they won at Anfield was even further back – in 1999. That record is unlikely to change on this Sunday. Liverpool are in scintillating form of late.

Two of the most enterprising small clubs of this season in the EPL are taking on each other. Burnley are hosting Watford. The odds are attractive, but the result is utterly unpredictable. Burnley will have the home advantage. But Watford are perfectly capable of dismantling them.

Our Prediction : an exciting draw.
Sign Up at 12BET to get unbeatable Soccer odds